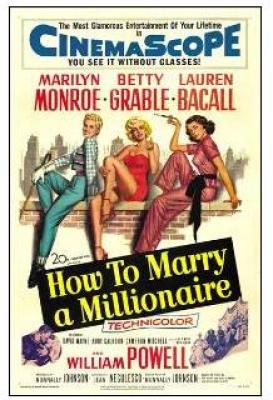 On November 5, 1953, 20th Century-Fox released the second motion picture filmed in its widescreen process called CinemaScope. The first had been a Biblical epic called The Robe, released on September 16, 1953. The second film was How to Marry a Millionaire, a comedy whose title pretty much describes the plot. It starred Marilyn Monroe, Betty Grable and Lauren Bacall as the three gold diggers.

Betty Grable (1916 to 1973) had been the GI's favorite pin-up during World War 2 - but her career was nearing its end when this film was made. In this film, Grable played a character called Loco Dempsey who has made a target out of wealthy Waldo Brewster - played by the bald-headed character actor Fred Clark (1914 to 1968). How to Marry a Millionaire runs 105 minutes. For those who decide to view the DVD, the following dialog can be heard some 26 minutes into the film, as Loco and Waldo a seated at a fancy restaurant:

Loco: Are you married?

Waldo: Married? I sometimes think I'm the most married man in the USA! Do you know how many females were at my house when I left there tonight?

Waldo: Seven. My wife... her sister who's divorced and I don't blame the guy for a second... their mother who must be 110 if she's a day... an aunt from North Attleborough, Massachusetts, and three more whose names I didn't even catch!